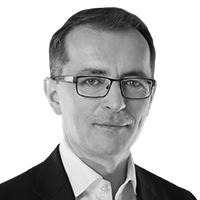 In 1999, he defended his doctoral dissertation with distinction, in which he dealt with the stability of the effects of orthodontic treatment. In 2004-2010 he worked at the ‘Institute of Mother and Child’ in Warsaw, where he dealt with children with complicated congenital malformations.

In 2013, the American Cleft Palate-Craniofacial Association awarded the professor the 2013 Samuel Berkowitz Long-Term Outcomes Study Award for the best publication in 2009 in the specialist scientific magazine Cleft Palate Craniofacial Journal. He is a member of editorial boards at the European Journal of Orthodontics and Orthodont (Czech Orthodontic Society magazine).

In 2010-2012, he conducted lectures and seminars on orthodontics at the Radbound University Nijmegen Medical Center in the Netherlands.He conducted classes there (lectures, seminars, planning and conducting treatment) with Dutch physicians specializing in orthodontics. The result was the second doctoral thesis defended in June 2011. In 2012, he defended his habilitation dissertation in the Czech Republic and began working in Switzerland at the University of Bern, where he is the director-coordinator for clinical trials.

He is the author or co-author of over 50 scientific publications, and presents the results of his research in several cities on 4 continents (Europe, Asia, North and South America). Currently, he conducts research projects in Switzerland, the Netherlands, the Czech Republic and Poland. Together with dr Ewa Węgrodzka, they analyze the methods of assessing facial aesthetics.