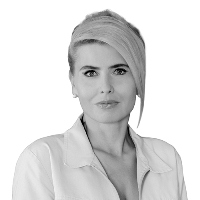 A dentist with 20 years of experience who specialises in periodontology and dental implantology.

Graduated from the Medical University of Warsaw and in 2001 defended her PhD thesis with distinction. She was one of the first persons in Poland to be awarded the prestigious title of Master of Oral Implantology in May, 2012, upon graduating postgraduate studies in Implantology at the Department of Medicine, Goethe University Frankfurt. Her further training featured numerous workshops and internships, including the University of California, Los Angeles, in Gothenburg and Bern.

She authored more than 100 publications and scientific presentations, including several foreign ones. For five years, she has been the head of the academic club for dentistry students at the Medical University of Warsaw and has received the Scientific Rector’s Award for her activity. Currently, she is actively engaged in training dentists in implantology and mucogingival surgery.

Dr Agnieszka Laskus is the co-founder and co-creator of Trio-Dent Clinic, a private dental clinic where she has worked for 18 years. Within the business, dr Laskus initiated free of charge dental assistance to single mothers houses in Warsaw in 2005 by engaging into the programme “Uśmiechnij się mamo!” (“Smile, Mom!”) of Fundacja Świętego Mikołaja (Santa Claus Foundation).

In 2012, she was one of the founders and sponsors of Dr Laskus Foundation, the heart of which is education and oral cavity protection. Dr Laskus enjoys contemporary literature, in particular English and Polish poetry. She likes classical music and the works of Italian, Spanish, French and Dutch painters. She practices Hatha yoga.